Is My Internet Being Throttled? ISP Throttling and How to Stop It

Is your internet being throttled? Your internet service provider could be slowing down your connection, so here’s what to do about it.

Slow internet speeds are frustrating. Whether it's preventing you from working remotely efficiently or watching your favorite TV show, you need to remedy the issue quickly. One reason your internet connection has slowed is because of ISP throttling.

In this article
What is ISP throttling?
Is my internet being throttled?
How to stop data throttling
What is paid prioritization and net neutrality?
Which internet providers have unlimited data?
Is ISP throttling legal?
Internet throttling FAQs
Bottom line

What is ISP throttling?

ISP throttling, also known as bandwidth throttling or data throttling, is when an internet service provider (ISP) deliberately limits a connection's bandwidth. It could lead to you experiencing slow internet speeds. By slowing down your internet connection, ISPs have more control on providing quality service to all customers using the same network.

Why do ISPs throttle internet speeds?

There are some legitimate reasons an ISP would decide to limit a person's bandwidth and internet speeds. Some of these reasons include:

Other reasons why an ISP would throttle internet speeds are for monetary gain. This is known as paid prioritization. Here are some examples:

Is my internet being throttled?

Do you have slow internet speeds? Let's review how to determine whether your ISP is throttling your internet connection, and what to do to fix the issue.

Can my mobile data be throttled?

Mobile data can be throttled by your phone company. Many phone plans have a data cap limiting how much data you can use on your mobile device. Once a phone crosses the data cap, internet speed slows down. A Northeastern University study confirms nearly every U.S. cellular provider is throttling.

If you haven't reached your data cap but still experience slow speeds, it may be because of deprioritization. When mobile traffic is congested, phone networks prioritize certain providers over others. This continues until there is less traffic on the mobile network.

Look for these signs of internet throttling

There are a few telltale signs of internet throttling. These can include:

If your internet connection is extremely slow, it can be an indication that throttling is occurring. The next steps are to run some tests to determine whether throttling is the issue.

Here is how to run an internet speed test:

If your connection isn’t throttled but you're experiencing slow internet speeds, then it may be time to upgrade your internet plan. Your current plan may not be capable of running multiple devices with the usage your household requires. Other troubleshooting tips you could try to speed up your internet include:

Check out our internet speed guide to help determine the minimum download speed you may need to consistently connect to the internet.

What if my internet speed is fine but my computer is slow?

If you find that your computer is slow, it may be time to take action against a computer virus. Viruses or malware take up a large amount of memory and can lead to slow computer performance. Other computer virus symptoms can include unfamiliar internet extensions or frequent pop-up windows.

How to stop data throttling

Once you determine your ISP is throttling internet speeds, you'll need to know how to fix it. There might not be much to do to completely stop throttling, but there are ways to mitigate the issue.

A VPN takes a public network and makes it private. It provides you with privacy and lets you anonymously send and receive data.

A VPN encrypts your internet traffic and keeps it private from even your ISP. Therefore, an ISP is less likely to throttle your traffic if it isn't aware of the websites or services you are using on your device. VPNs can also help you access geo-restricted content like Netflix shows from the UK.

Some of the best VPN providers include:

However, there is still a chance your connection could get throttled during peak hours. An ISP may still need to manage a congested network and could throttle your usage.

Use a proxy server

A proxy server is an application between you and the internet. It hides your IP address from the websites you’re visiting and your ISP. Because your ISP doesn't know who you are, it's less likely to throttle your internet connection.

Paying for a private proxy server could speed up your connection speed and prevent a congested network from slowing it down.

If you face throttling problems because you hit your data cap, it's time to get in the habit of monitoring your data usage. Most ISPs offer data plans with a cap, which means you have a limit on how much data they can use in a month.

You can watch your data usage by checking your broadband or mobile cellular account. This will give you an idea if you’re using more data than necessary.

You can avoid hitting your data cap by using less data. Some strategies can include checking your data usage daily, watching videos only on a low-quality setting, or preventing apps from running in the background. Otherwise, it may be ideal to purchase a plan with a higher data cap.

Use the internet during non-peak hours

Non-peak hours are when people are not using the network. This can include times like when everyone is sleeping or no one is home. A person who wants to use a high-bandwidth service like torrenting will probably want to avoid evenings because everyone is home from work or school.

Shop for a new internet provider

Sometimes there’s no bypassing an annoying internet provider. If throttling continues to be an issue, it may be worth changing to a different provider.

Besides the usual concerns of reliability, cost, and speed, you should also consider looking at a provider's terms of service. This can provide specifics on what the provider does when data limits are reached or when they may throttle your connection.

By moving to a better internet provider, you may enjoy faster speeds without fear of getting throttled.

What is paid prioritization and net neutrality?

For example, in 2009 Apple throttled iPhone users using Skype at the request of AT&T. Net neutrality would have prevented this situation from happening by ensuring ISPs can't block certain sites.

Which internet providers have unlimited data?

In 2015, the FCC voted in favor of net neutrality rules including:

However, net neutrality rules were overturned on a federal level in 2018. Individual states could impose net neutrality, such as California, which created a 2018 law to prevent ISPs from throttling connections.

What does throttling mean?

Throttling is when an internet service provider intentionally slows down the speed of an internet connection. It may do this to help manage network congestion, to give paid prioritization to certain sites or users, or because a user has passed their data cap.

How do I stop internet throttling?

On the U.S. federal level, internet throttling became legal after net neutrality was overturned in 2018. Individual states, such as California, have passed laws to prevent ISPs from throttling internet speed.

Internet throttling can be annoying, but sometimes networks must slow down internet speeds to provide fair service to all users. However, with the overturning of net neutrality regulations on a federal level, there’s not much stopping internet providers from throttling a connection for monetary purposes.

If you notice a slow down of internet speed and haven't passed a data cap, internet throttling may be to blame. Run a test to determine whether your connection is being throttled by your ISP. Depending on your options, it may be best to change providers or use some type of proxy server.

Another possibility to deal with internet throttling is to start using a VPN. It can help improve your network speed and keep your data private. This may be one of the best ways to stop your internet connection from being throttled without having to change providers or use technical equipment.

Sara J. Nguyen
Sara J. Nguyen is a freelance writer specializing in cybersecurity and marketing. Her educational background in public relations helps her work closely with companies to provide informative and engaging content for their audience. When she's not writing, you can find her planning her next international trip.
+
Table of Contents
Related Articles 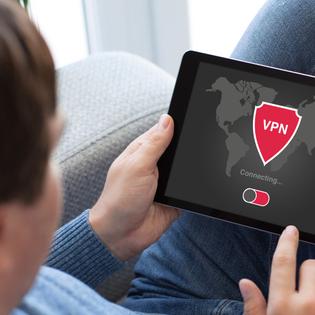